The Problem Beyond Berkman’s House

​After the Cleveland State University board decision came out about a month ago with their decision to buy the school’s president Ronald Berkman a new house, the president received a couple more reasons to not visit campus that often. One, is because his new, lavish home will be in Cleveland Heights, not downtown and two, because ever since the announcement, a large portion of the student body has waged an all out battle against the president and the board.

An online and print petition has been going around for the past months organized by the The Student Socialist Society at Cleveland State, and their momentum is not dying out yet. So far they have 1,028 signatures and have organized a rally to protest the funding of Berkman’s home.

Along with this, The Stater and the Cauldron newspapers have reported on the purchase of the new house, and the newest issues of these publications include exclusive interviews with the man himself. Needless to say, if the president step foot on campus anytime soon, he’d have a lot of questions to answer. The shear response from the students can and should have a vertical effect towards the higher powers of the school, and according to a recent article in the Cauldron, he has been making an effort to answer these questions because of the magnitude that this issue has reached.

But the students aren’t the only ones taking notice of this. Major news outlets have reported on the situation including The Plain Dealer article, which unapologetically explains the president can and should “buy his own house”--which echoes the demands of many college students and alumni. It’s clear that not only students and alumni are upset by the facts. The fact that Cleveland State’s president’s base salary is 430,000, or the fact that he could’ve easily considered a multitude of other places to host funding events in...the list could go on.

And the most opinionated article I read was actually on CoolCleveland.com, by Ellen Connally, a retired judge for the Cleveland Municipal Court, who makes a number of points critiquing the Berkman house decision. Connally wrote,

“It is an accepted fact in the field of university fundraising circles that graduates of state-funded institutions like CSU for the most part feel that “I paid my tuition, I got my degree, I’m not interested in donating money” — especially to a generation of students who graduate with huge student loans and not always the greatest job prospects”. She continues to say that these are the factors that should be kept in mind before the school makes big money decisions.

When Berkman and the Board gave their explanation for the house, they thought it would calm the students down, and give them enough information. I really tried to understand the explanation but it didn’t sit well with me. All it showed is a clear reflection of what the modern college system has become, and how it has increasingly become more about money, profit, and running colleges like businesses.

The latest Cauldron article quotes Berkman by saying, “Every president [of a university] in the state of Ohio has a house, and every president uses it as a place to showcase the university and a place to create intersections with donors and community leaders by having events there, so that is how I regard it.” I appreciate the explanation, but this only further proves how elitist and funding-centered universities have become, and how even the president doesn’t have the choice to have less money spent on them. This is not an attack on Berkman in this case, because he’s not completely at fault of this. It’s the overall system’s fault, but it’s up to the individuals with power and prestige to weigh in on these issues to make a difference.

During the rally that occurred about a week ago, The Vindicator interviewed a couple of SSS members to ask them about what is their main goal and ideas surrounding this whole incident. Pat Mahoney, avid member of SSS and Political Science major stated,

It should be clear that the problem that the SSS has, along with many other students is that this issue goes way beyond Berkman’s house. It’s bringing into light the conversations about adjunct faculty, high tuition rates, and overall campus equity. The board and President can cover up this one unattractive issue of buying a house all they want, but what they need to realize that this is just simply the tip of a very corrupt and problematic iceberg. Mahoney concludes, “right now, the dialect is that the administration is going to do whatever they want, and if students complain about it then ‘oh well’.”

One of the most telling things that has happened to the industry of colleges is defined in this very sentence. Colleges have become a booming industry. The United States is one of the only countries that has such high tuition rates, and where graduates are drowning in their student debt until they are in their 40’s. Education has always been painted as the ultimate connector between the people and the American Dream. According to everything our society tells us since the day we enter school, is that if we get an education, we will be able to succeed and do whatever we want. This not only acts as a motivator to do well in school, but also creates a supply and demand for college and university institutions.

College is seen as such a prestige; an important and necessary thing in our society. You can’t get away from the pressures of getting a college degree, and that’s the perfect way that large corporations er-colleges, trap people into taking out loans, and paying a lifetime of payments to go to school for 4+ years. Along with this, college has become a process in which to gain status, not education, and this is seen with too many schools not providing the correct programs students need.

This goes far beyond even the cost of education and the economics of it, it’s become more about how the system of colleges are failing their students as well. A New York Times article published in 2011, argues that “college costs aren’t the main problem”. It’s important to also look at the way the colleges are using their money to help the students and programs. The Times article states, “If policy makers began to tie funding to performance — both graduation rates and measures of actual learning — we might not drive down the cost of the good colleges. But I bet we’d stop wasting so much money on colleges that are doing their students a disservice.” The problem isn’t that universities aren’t receiving enough money, it’s that they’re not utilizing it correctly.

The response to Berkman’s house was well overdue. It reflects a large miscommunication between the student body and their universities. The anger from my fellow CSU students is not overreacted and it’s not unnecessary. It’s important to continue critiquing the institutions we are putting our money and time into, the very institutions that are responsible for helping us build our futures.

Obviously, the student body and activist organizations on campus have had a bitter response to CSU’s decision about Berkman’s house. But it should be considered, that if this country was in a different kind of climate regarding college education, myself and my fellow CSU peers wouldn’t be so fired up about this. CSU isn’t the only school protesting its school’s corruptive leadership, everyone needs to be checked. The fact of the matter is, we are tired of being treated strictly as sources of profit, instead of human beings who are spending thousands of dollars to be educated, trained and cared for by a university.

Incidences like this make me very nervous about how much power the money holders of Universities have, and how they’re using the money, and what we don’t know. Cleveland State has an abundance of issues where this money could’ve gone to good use; broken elevators, program cuts, high parking costs, etc. So I hope that the people running our school are looking over these decisions very carefully. It’s not how or from who they got the money for Berkman’s house, it’s the principle of the matter. It’s the elephant in the room that is asking; how far are they willing to go?

I’m happy to hear that President Berkman is going to make an effort to connect with the students better, as said in the recent Cauldron article. This goes to show that the student’s voices can be heard and that protests and petitions do need to keep happening in order to shed light on a corrupt system that fuels higher education. But I think the question on a lot of people’s minds is; is this genuine and will this be enough? There are many improvements that CSU will be undergoing, whether it’s the new Film School or the president’s effort to talk to students, but I hope it is known that there is always room for improvement--and it’s is necessary for student voices to demand this. 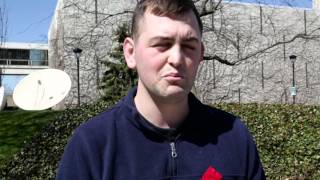 Making the Most of the Holiday Season

A Muckraker’s Guide to Steelyard Walmart

NFTs are Bad. No, You Will Not Change My Mind.